Much is written about social media influencers. With the consistent popularity of Instagram, and to a lesser degree Snapchat, it’s not surprising that the selfie era is sticking around; at least for a while. What is rarely discussed though is the social aspect of these platforms. (For most, the number one online social destination is Instagram. There is no debating it and other platforms are falling flat and no longer hold much interest to many of us.) Several years ago, when Instagram was new, it felt much more social. This was also before the rise and influx of ‘influencers.’ People shared normal scenes from everyday life without wondering if the photo was styled correctly or it had that ‘Instagram look.’ Comments on photos flowed in with users interacting with each other; and it didn’t matter if they knew each other in real life or not. Now the social aspect on social platforms, specifically Instagram, has changed.

Influencers and micro-influencers changed the game and feel of Instagram. Brands woke up and realized it was a great place to shift advertising dollars.  At first it was simple for smaller brands to work with influencers also; it wasn’t only big brands getting into the game. The playing field was relatively democratic for all brands to work with influencers. And then the playing field shifted with big brands increasing their budgets and offered more to work with an influencer. Currently, one post (picture) of a product with a major influencer commands $40,000 or more. Small brands can’t compete with such large advertising budgets. Many think influencers only receive free product. The underbelly of social media influencers is that they command thousands of dollars to also post about said free products. It was around this time when mega-influencers commanded more per advertisement that the social in social media began to dwindle.

Instagram turned into a game of numbers and likes instead of a social platform with genuine interactions. Even non-influencers sat up and paid attention to what they posted. Updates became more scripted instead of candid. Suddenly everyone is having ‘Instagram’ worthy dinner parties. Gone are the days of a snapshot capturing a Saturday organizing a closet, instead it’s replaced with a perfectly styled photo of flowers from the market or garden. And though these newly styled and glossy snaps are perfectly lovely, they often lack authenticity of real life. To be social you need the edge of real life and some of that is lost in the perfectly turned out world of Instagram.

Where social media went wrong is that it lost the original back and forth interactions which are the core of being social. There is something to be said about the original banter and exchanges which occurred on Instagram in its infancy. Someone posts a picture and a stranger commented, original poster comments back, and a social exchange blossoms. Social interaction is about listening and then also interacting. There is something authentic about spontaneity without forced effort. Again I will state: being social is about interacting and also listening. To be a good social force, one must be a good listener. This applies to the offline world as well. So many Instagram accounts remind me of people in real life who talk constantly, but rarely listen. Post after post of selfies and products, but with no interaction to friends and fans is similar to a blowhard constantly talking, but rarely taking the time to listen.

Authentic social media interactions still occur, but they are often on smaller more candid accounts; those that don’t worry about showcasing a glossy filtered life. I’ve noticed several clusters of accounts that interact naturally with others are by real people in the real world who aren’t influenced by influencers and the trappings of making each post picture- perfect. Others who maintain the social in social media are pet owners. I maintain a private account with mostly Westie owners as friends. We love our dog breed passionately and leave messages on each other’s accounts and respond accordingly; it’s social in the fact that we actually interact with each other. Social media isn’t a one way street where you push out a post and add no interaction with your audience or friends.

Listening is one of the greatest assets anyone in the social media sphere can harness. It’s one of the reasons we created Edith Press. Listening is a skill. Listening leads to being responsive and social so we can help tell your story. Unfortunately, too few fashion and beauty public relations and even influencers understand that listening is the first step to enforcing the social in social media. For when you sit back and listen, you can then authentically communicate with your friends, fans, and followers. The next time you go out with your friends or family, take note how many in the group truly listen to what others say. You’ll notice bored eyes, downcast heads, and ears that hear, but listen. Often people are simply biding time until it’s their turn to speak. 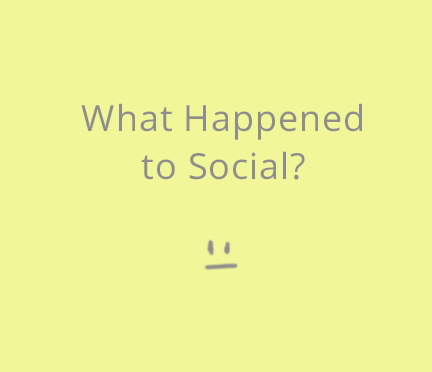 What many don’t realize is that the most real people (unfiltered) on social media are probably the most social and even influential of all. They honestly share moments without the confines of a sponsored (paid) post or worrying if their ‘content’ portrays a perfectly polished life. They comment and respond to posts in a chatty manner. Authenticity and open communication with friends/followers is the social in social media. It’s the real people with normal lives who are the most social on social media. They live without the mandates of feeling self-conscious in what they post.

Influencers didn’t single handedly change the social aspect of Instagram or social media for that matter. As social platforms become more brand-centric and self-centric, the cosy social aspect fades into the background. Much of the spontaneous joy of life is removed when every detail is staged and poised before uploading to share with the world. It’s stressful worrying about if your photo looks good enough to share. Is it styled perfectly? Is the lighting alluring? Will it receive a lot of likes? Perhaps the dwindling social aspect is why many people choose to take breaks from social media. Hopefully the future holds a new app or platform that lets users feel the fun aspect of being social again.